GET A QUOTE
Menu

GET A QUOTE
Menu

We’ve been responding
to incidents & intrusions
for over 25 years.

An effective Keyholding & Alarm Response is essential in minimising the loss and damage that can occur should an intrusion occur. 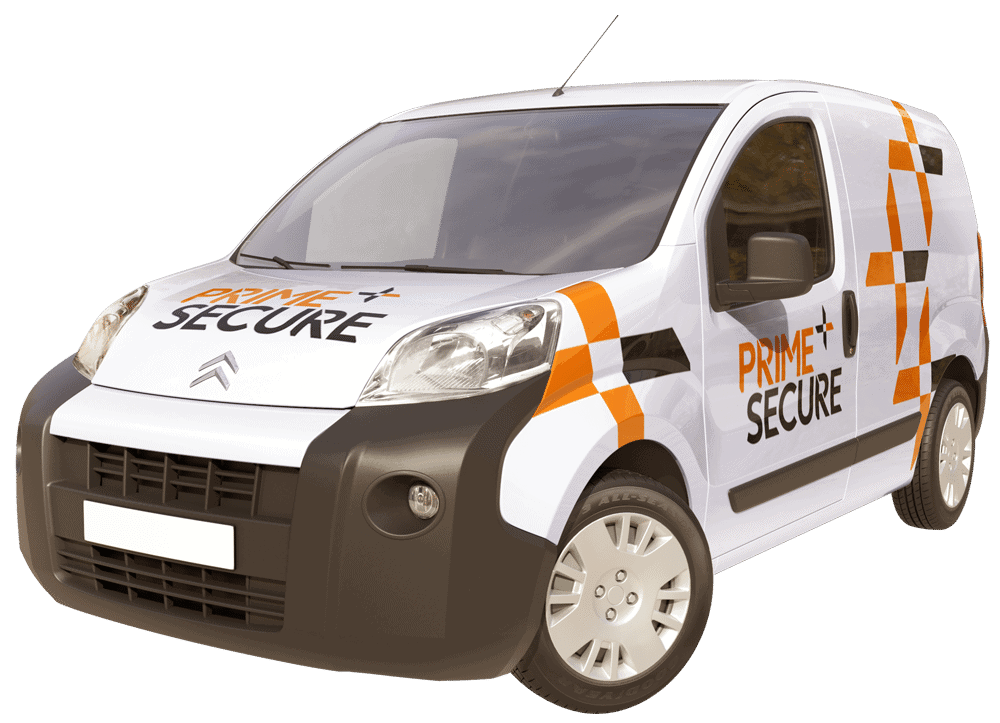 Prime Secure’s CCTV Towers and Security Guards offer tremendous protection and a highly visible deterrent for your construction site but, should an incident occur, effective protocols must be initiated immediately. The longer it takes for your site to be attended in the event of an intrusion, the greater the risk of damage or theft occurring.

We provide keyholding and alarm response services to building sites throughout the UK. Our round the clock service ensures your site is in the safe hands of SIA licensed security personnel and a professional keyholding service ensures that pre-agreed and effective protocols are initiated in the event of an intrusion on-site.

With Prime Secure’s keyholding service your keys will be kept safe, secure and readily available to our experienced and highly-trained security officers who will spring into action as soon as an issue is detected.

Once an incident has been detected, our security officers will be immediately deployed to your site. With our UK wide coverage, you’re never far from a Prime Secure security officer. No matter the time or location, we will have experienced personnel on-site as soon as possible. once on-site our staff will initiate pre-agreed protocols and thoroughly investigate your site to identify the source of the alarm activation and act accordingly.

Why use a keyholding service?

There are many reasons to take advantage of Prime Secure's keyholding service. Our operatives are SIA licensed and having an effective keyholding service in place can help to reduce your insurance premiums, not to mention the more obvious benefits of ensuring that your emergency protocols are correctly carried out and that risk to your staff from attending a potential ongoing incident.

Let Prime Secure handle your emergency and minimise your risk of theft and damage by ensuring highly trained and experienced security officers are immediately deployed to your site the moment an intrusion occurs.

Our keyholding security officers are extensively trained, SIA licensed and undergo a rigorous development program to ensure the quality of the Prime Secure keyholding service.

You can read more about our staff development initiatives here.

Our seasoned security officers are SIA licensed and trained in dealing with incidents where intruders may still be on site. We also work with you to agree on a set of protocols and procedures that are initiated the moment our security team arrive on-site following the detection of an intrusion. Their actions will be specifically designed for your site and your business.

How quickly can our keyholders respond?

With UK wide coverage we have keyholding security officers that can respond quickly to any intrusion detected on your construction site. Our national reach means we don't subcontract out work to local companies and your site will only be attended by experienced and extensively trained Prime Secure keyholders.

Some construction site managers opt to nominate a member of staff as designated keyholder. Considering the cost of keyholding is typically around £1 a day this option saves little money and when you consider the downsides of this option, is very much a false economy.

In our experience, the likelihood of a site employee providing the same level of service as a qualified keyholder is remote and, given the high value of equipment and materials on-site, any failure to do the following can result in significant loss of money and time.

Keyholding, naturally, will involve the protection of the keys 24 hours a day. They will also need to know the security code(s) for the alarm(s) and the keyholder must keep this information in the same place as the keys. If you were to hire an external security company to take on the keyholding role, you can be assured that protecting the keys would be dealt with professionally and securely at all times.

As they can reset the alarm system, keyholders are often entrusted to be an emergency contact for the local police or a private security firm that monitors the property. This must be taken into consideration when selecting the right person for a keyholding position. They must be available, responsible and practical.

Why protect a construction site?

Each year the construction industry in the UK is victim to approximately £800 million of losses thanks to vandalism and theft, according to a report from insurers Allianz Cornhill.

Their study shows that these huge losses are derived mostly from the costs of hiring replacement items, replacing those same items, business lost as a result, and increases in premiums from insurance companies.

Theft - The Chartered Institute of Building's 2016 study on Crime in the Construction Industry reports that, of the 1,100 professionals surveyed from the construction sector, 21% had suffered theft the week they were surveyed. If that wasn't bad enough, a massive 92% reported that they suffered from theft on an annual basis, with many experiencing it on a weekly or monthly basis!

Vandalism - Reported in the same CIOB study, 91% or participants surveyed stated that they had been the victims of vandalism. Fences and locks may put off the casual intruder, but to deter hardened criminals and prevent serious equipment damage, a CCTV Tower is essential.

What do our clients say?

"Prime Secure has been a key part of our team for project safety. They developed the system to the individual project requirements and have been proactive in altering the system as the project needs change. The staff have been both friendly & efficient throughout the project and are always at the end of the phone when needed."
Scott McBain
Site ManagerRobertson Central West
"Prime Secure have provided an excellent service on the Mavis Valley project. Prompt arrival on-site and concise reporting of issues or concerns. Guards always well-presented providing a smart, visual deterrent and were good communicators."
Derry Barton
Project ManagerKier Construction
"Prime-Secure are competitively priced and very knowledgeable. Their experience and depth of knowledge within the business are second to none. Our systems are thoroughly checked monthly, we get weekly updates and app-based systems allow our team to monitor remotely. Fully endorse Prime Secure - you can tick and leave them to do their job."
Orchard Primary, BrixtonElliott UK Ltd
"We have absolutely no issues at all. The guards that you supply us are always of the highest standard and the aftercare visits that you provide really assist with them being the face of our company. I am not currently aware of any additional requirements at present, but as you know, things can change quickly, so we always keep your number to hand!"
Toby Allen
Supervisor – StructuresFM Conway
"Always a pleasure dealing with Prime Secure. First class proactive service for installation and service maintenance. Prime Secure supply top customer service along with highly competent engineers to carry out the work."
Iain Gunn
Assistant Site ManagerEngie
"I have used Prime Secure’s services on a variety of sites and situations and have found them to be an excellent provider of security solutions. Knowledgeable and hardworking engineers combined with a friendly and dedicated support staff mean that Prime secure is my go-to when it comes to the provision of security on site."
Andy Griemsman
Site ManagerClancy Docwra
"Both our guards are a credit to Prime secure. Both guys arrive early to walk the site and ensure all is secure before I leave. In the mornings they wait until I arrive to inform me that all is well and no issues throughout their shift. Can you please pass on my gratitude to both guards?"
Craig Cairney
Site ManagerA S Homes
"We have used Prime Secure on numerous occasions over the years on a variety of construction projects and have found them to be responsive to our & our client’s needs, whilst also offering a safe & reliable service, and we look forward to continuing this relationship in the years to come."
Ralph Caulfield
Retail DirectorDickie & Moore
"I have personally worked with Malcolm and the rest of his team at Prime over the past five years whilst employed at various organisations and have found them very customer focused, very reactive to any demands/needs you may have and nothing is too much trouble, I would highly recommend Prime Secure."
Frank McManus MCIOB
Managing DirectorProcast Property Services Ltd
"Just a quick line to thank for today’s prompt attendance and resolving the issue, it’s much appreciated. I have used you on several sites and you have never let me down – even when I called you with same day requests!"
Site ManagerClancy Docwra
"Malcolm and his team have effectively and professionally managed the constraints and challenges across all our developments in the North of Scotland with the exceptional quality of equipment never failing, and the many attempts to gain access to our developments being caught and challenged. Your team are highly experienced, knowledgeable and very professional."
Kevin Urquhart
Construction DirectorBarratt North Scotland
"We chose to use Prime Secure to protect our project sites because of their professional service and competitive rates. Having used their security systems on a number of our projects sometimes in remote and exposed locations we have always found them to provide an effective and reliable service."
Craig McCandlish
Divisional Commercial DirectorI & H Brown Ltd
"I am extremely happy with the service being provided with both Hass and Jouseff doing a fantastic job; they are a credit to your company. Would like to wish you all a Merry Christmas and all the best for the."
Kieran Pugh
Project ManagerRoadbridge
Previous
Next

WE ARE
PRIME SECURE.
ARE YOU?

We use cookies on our website to give you the most relevant experience by remembering your preferences and repeat visits. By clicking “Accept All”, you consent to the use of ALL the cookies. However, you may visit "Cookie Settings" to provide a controlled consent.
Cookie SettingsAccept All
Manage consent

This website uses cookies to improve your experience while you navigate through the website. Out of these, the cookies that are categorized as necessary are stored on your browser as they are essential for the working of basic functionalities of the website. We also use third-party cookies that help us analyze and understand how you use this website. These cookies will be stored in your browser only with your consent. You also have the option to opt-out of these cookies. But opting out of some of these cookies may affect your browsing experience.
Necessary Always Enabled
Necessary cookies are absolutely essential for the website to function properly. These cookies ensure basic functionalities and security features of the website, anonymously.
Functional
Functional cookies help to perform certain functionalities like sharing the content of the website on social media platforms, collect feedbacks, and other third-party features.
Performance
Performance cookies are used to understand and analyze the key performance indexes of the website which helps in delivering a better user experience for the visitors.
Analytics
Analytical cookies are used to understand how visitors interact with the website. These cookies help provide information on metrics the number of visitors, bounce rate, traffic source, etc.
Advertisement
Advertisement cookies are used to provide visitors with relevant ads and marketing campaigns. These cookies track visitors across websites and collect information to provide customized ads.
Others
Other uncategorized cookies are those that are being analyzed and have not been classified into a category as yet.
SAVE & ACCEPT

Prime Secure operate the Fiver Initiative, our charity arm which sees us ring fence profits and encourage our CCTV clients to join us in donating to local charities and community organisations in the areas we work in.

Prime Secure operate the Fiver Initiative, our charity arm which sees us ring fence profits and encourage our CCTV clients to join us in donating to local charities and community organisations in the areas we work in.